I have been asked to show more detailed images of how I created the butterfly and dragonfly pictures seen in my last post so here is version number three with extra photos.

Farfalla wallpaper sample from B&Q was used for the insects

Travel wallpaper from B&Q was used on the first of the dragonfly pictures and on the book cover.

Each of the pictures began with a background which was stamped using acrylic paint on a wide piece of lace. It worked out blotchy and had very little detail but, as it was only the background, I figured it didn’t matter.

In the latest picture I took my colour scheme from a sample of B&Q ‘Newsprint’ wallpaper. I began by mixing Daler Rowney ultramarine with process magenta and yellow ochre to get the background shade I wanted. This was painted onto bits of lace and onto a ‘leaf’ and these were stamped using a homemade brayer. First time round I did it using a small tin but this time progressed to my deluxe version (a piece of metal clothes rail cut down to approx 3 inches and pushed onto a small paint roller). 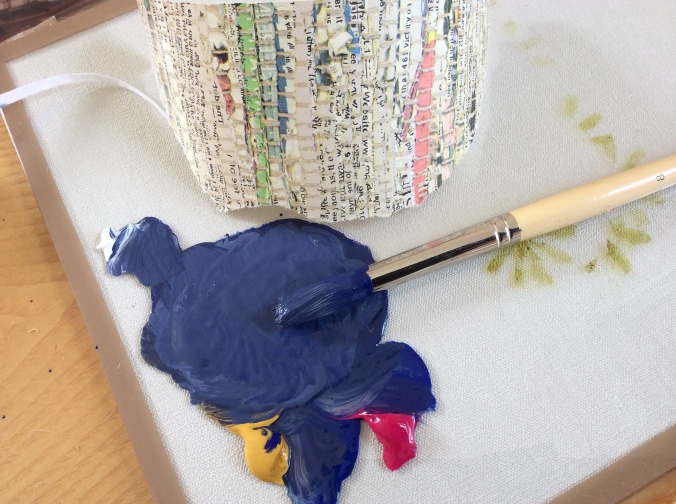 Mixing acrylic paint to match the blue shade seen in the ‘Newsprint’ wallpaper. 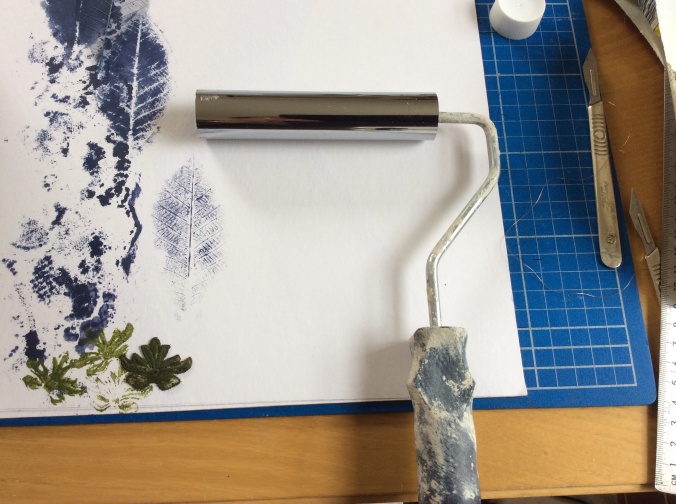 Frugal crafting with my home made brayer.

As the background started to take shape I loosely laid the papers to get an idea of where I wanted them.

The papers are loose laid to establish their positioning.

More stamping was done using a funky foam flower (central area) while the green stamp in the bottom left corner was made from a leaf shape, again cut from lace and painted with acrylic (a little yellow ochre and magenta mixed with sap green). Sequin waste was used as a stencil, top left and on the right hand edge. For this a little more ochre, a lot more magenta and a little white was added to the background blue and applied with a sponge. 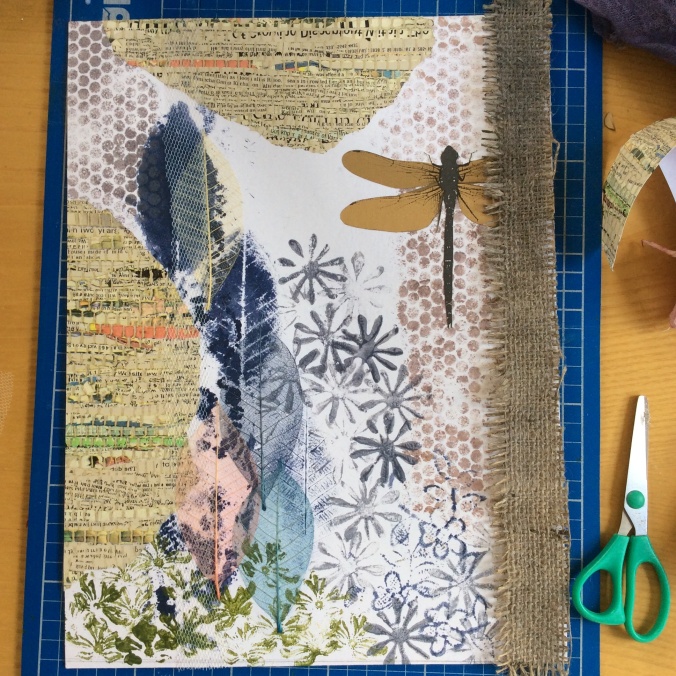 More stamping and stencilling…..the hessian is loose laid and will change position before I’ve finished.

Several transparent leaves, in coral, yellow, blue and teal, were applied using PVA. Rather than pasting the leaf it’s far easier to simply lay them on the paper and apply the paste directly on top, it soaks through easily. The large dragon fly was pasted in place and strips of netting were laid vertically on the paper, and again, pasted over with generous amounts of PVA. As the acrylic paint is permanent once it’s dry you can paste over it without fear of smudging. I discovered this isn’t the case with the Distress Ink, it will smudge, so I was careful to avoid getting any PVA on the tiny dragon flies, which were the last stamps to be applied.

Detail showing the netting and leaves.

The ‘Newsprint’ paper was finally glued down and a border of hessian, bleached with Miltons to tone it down a little, was added to the left hand edge using a cool melt glue gun. I got my gun from The Range, it was very cheap but is in use constantly and I would definitely recommend them. To finish off bead accents were applied, again using the glue gun.

You could go on forever adding layers of transparent fabric and trims, it’s quite addictive and a fun way of experimenting with different materials/techniques. 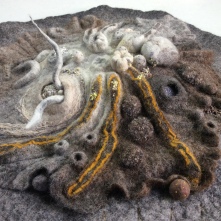 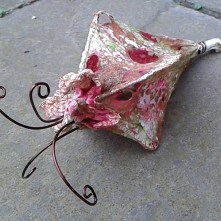 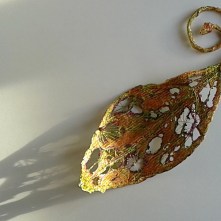 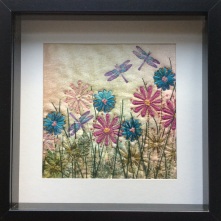 My skeleton leaf created for the Felting and Fibre Studio challenge. 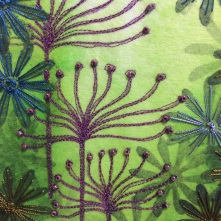 Machine and hand stitching onto Vilene 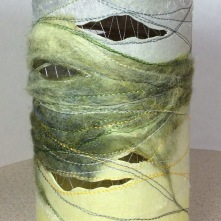 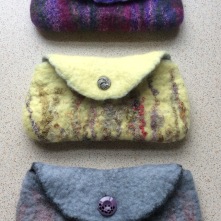 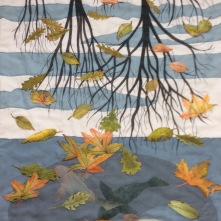 A Tribute to Three Worlds by Maurits Cornelis Escher 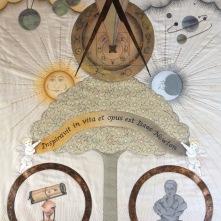 Alchemy – Inspired by the life and work of Sir Isaac Newton 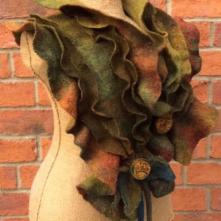 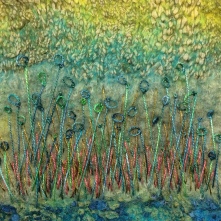 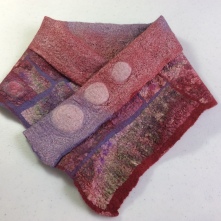 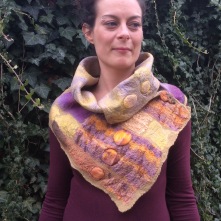 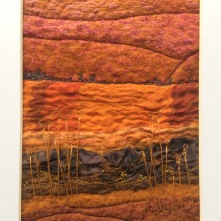 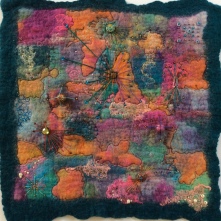 The Fate of Constance 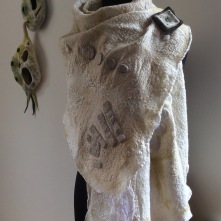 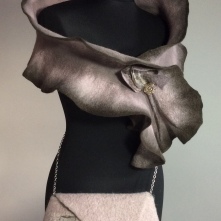 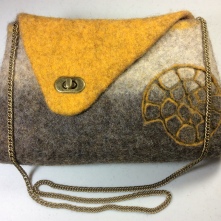 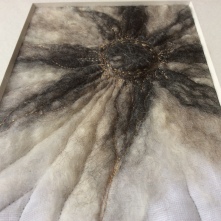 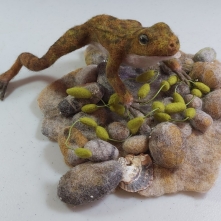 After the Fire – art Quilt inspired by a Banksia Seed Pod which was charred in a bush fire. 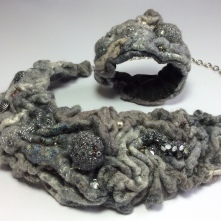 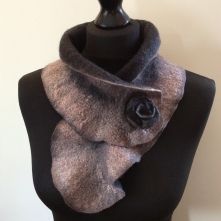